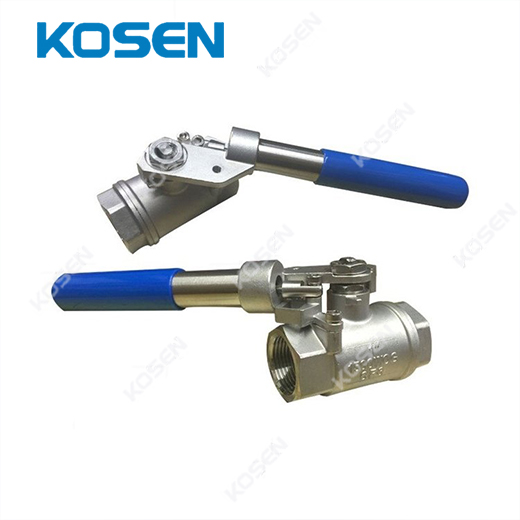 The threaded ball valve adopts a split structure design. The ball valve has a fire-proof structure, and there is an anti-static device between the balls; Explosion proof design of valve rod; There are double-layer valve stem packing, which meets the requirements of valve stem leakage test; The design of double dish shaped shrapnel automatic compression packing; The internal thread ball valve is applicable to various pipelines with PN1.0 ~ 12.5mpa and working temperature of -29 ~ 180 ℃ (the sealing ring is reinforced polytetrafluoroethylene) or -29 ~ 300 ℃ (the sealing ring is counterpoint polystyrene). It is used to cut off or connect the medium in the pipeline. The internal thread ball valve is made of different materials, which can be applied to water, steam, oil, nitric acid, acetic acid and other media respectively.

6. Fire proof structure of screw type ball valve: in case of accidental fire, non-metallic materials such as valve seat, packing and gasket are burned. In order to prevent a large amount of leakage of media, a fire-proof sealing structure is designed.

Threaded ball valve small volume pneumatic ball valve is used in various process occasions that have great restrictions on installation size and volume. It has been successfully applied in many industrial fields, such as air conditioning system, fire protection system, water treatment system, pipeline purging, analytical instruments, flue gas sampling and other industries. Threaded ball valve is suitable for various industrial, instrument and other pipelines. It has the advantages of small size and stable performance